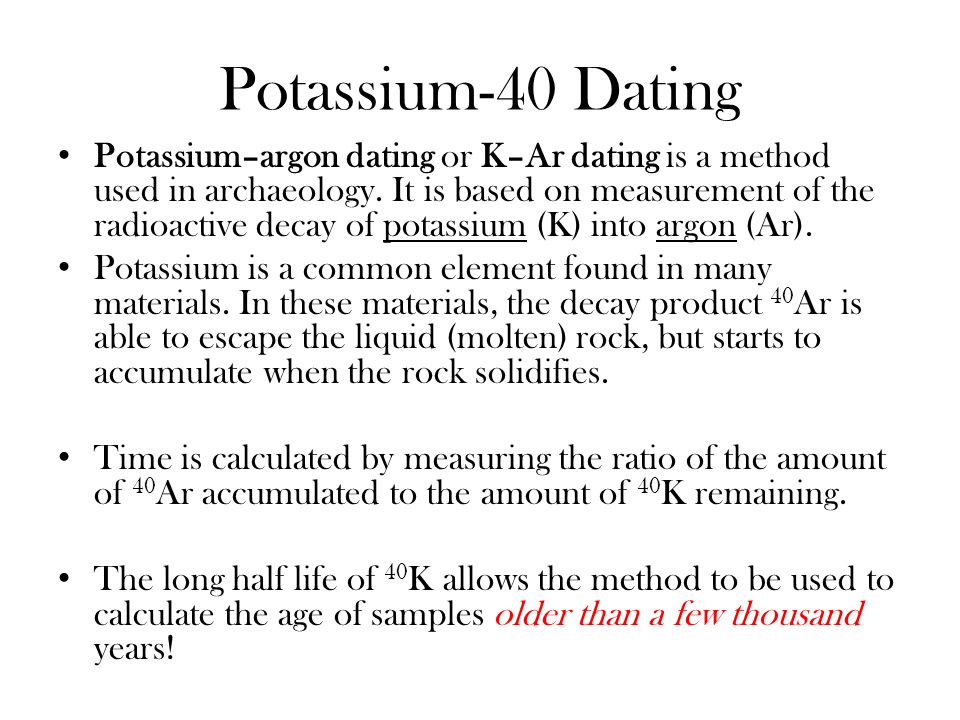 Geochronologists use the branching ratio as a semi-emperical, adjustable constant which they manipulate instead of using an accurate half-life for K A number of recent lava flows within the past few hundred years yield potassium-argon ages in the hundreds of thousands of years range. This indicates that some excess argon is present. Where is it coming from? And how do we know that it could not be a much larger quantity in other cases? If more excess argon were present, then we could get much older ages. It is true that an age difference in the hundreds of thousands of years is much too small to account for the observed K-Ar ages.

But excess argon is commonly invoked by geologists to explain dates that are too old, so I'm not inventing anything new. Second, there may have been a lot more more argon in the magma in the past, and with each eruption, the amount decreased. So there would have been a lot more excess argon in the past, leading to older ages. For rocks that are being dated, contamination with atmospheric argon is a persistent problem that is mentioned a number of times.

Thus it is clear that argon enters rock easily. It is claimed that we can know if a rock has added argon by its spectrum when heated; different temperatures yield different fractions of argon. It is claimed that the argon that enters from the atmosphere or other rocks, is less tightly bound to the crystal lattice, and will leave the rock at a lower temperature. But how do we know what happens over thousands of years? It could be that this argon which is initially loosely bound if it is so initially gradually becomes more tightly bound by random thermal vibrations, until it becomes undetectable by the spectrum technique.

The fact that rock is often under high pressure might influence this process, as well. The branching ratio problem Back to top See some updates to this article. We now consider in more detail one of the problems with potassium-argon dating, namely, the branching ratio problem. Here is some relevant information that was e-mailed to me. There are some very serious objections to using the potassium-argon decay family as a radiometric clock.


The geochronologist considers the Ca40 of little practical use in radiometric dating since common calcium is such an abundant element and the radiogenic Ca40 has the same atomic mass as common calcium. Here the actual observed branching ratio is not used, but rather a small ratio is arbitrarily chosen in an effort to match dates obtained method with U-Th-Pb dates. The branching ratio that is often used is 0.

Thus we have another source of error for K-Ar dating. We now consider whether they can explain the observed dates. In general, the dates that are obtained by radiometric methods are in the hundreds of millions of years range. One can understand this by the fact that the clock did not get reset if one accepts the fact that the magma "looks" old, for whatever reason.

That is, we can get both parent and daughter elements from the magma inherited into minerals that crystallize out of lava, making these minerals look old. Since the magma has old radiometric dates, depending on how much the clock gets reset, the crust can end up with a variety of younger dates just by partially inheriting the dates of the magma.

Thus any method based on simple parent to daughter ratios such as Rb-Sr dating is bound to be unreliable, since there would have to be a lot of the daughter product in the magma already. And Harold Coffin's book Creation by Design lists a study showing that Rb-Sr dates are often inherited from the magma. Even the initial ratios of parent and daughter elements in the earth do not necessarily indicate an age as old as 4.

Radioactive decay would be faster in the bodies of stars, which is where scientists assume the heavy elements formed. Imagine a uranium nucleus forming by the fusion of smaller nucleii. At the moment of formation, as two nucleii collide, the uranium nucleus will be somewhat unstable, and thus very likely to decay into its daughter element. The same applies to all nucleii, implying that one could get the appearance of age quickly.

Of course, the thermonuclear reactions in the star would also speed up radioactive decay. But isochrons might be able to account for pre-existing daughter elements.

Furthermore, some elements in the earth are too abundant to be explained by radioactive decay in 4. Some are too scarce such as helium.

So it's not clear to me how one can be sure of the 4. Why older dates would be found lower in the geologic column especially for K-Ar dating Back to top In general, potassium-argon dates appear to be older the deeper one goes in the crust of the earth. We now consider possible explanations for this. There are at least a couple of mechanisms to account for this. In volcano eruptions, a considerable amount of gas is released with the lava.

This gas undoubtedly contains a significant amount of argon Volcanos typically have magma chambers under them, from which the eruptions occur. It seems reasonable that gas would collect at the top of these chambers, causing artificially high K-Ar radiometric ages there. In addition, with each successive eruption, some gas would escape, reducing the pressure of the gas and reducing the apparent K-Ar radiometric age.

Thus the decreasing K-Ar ages would represent the passage of time, but not necessarily related to their absolute radiometric ages.

How to solve radiometric dating problems

In addition, lava emerging later will tend to be hotter, coming from deeper in the earth and through channels that have already been warmed up. This lava will take longer to cool down, giving more opportunity for enclosed argon to escape and leading to younger radiometric ages. A discussion of these mechanisms may be found at the Geoscience Research Institute site. Another factor is that rocks absorb argon from the air. It is true that this can be accounted for by the fact that argon in the air has Ar36 and Ar40, whereas only Ar40 is produced by K-Ar decay.

But for rocks deep in the earth, the mixture of argon in their environment is probably much higher in Ar40, since only Ar40 is produced by radioactive decay. As these rocks absorb argon, their radiometric ages would increase. This would probably have a larger effect lower down, where the pressure of argon would be higher. Or it could be that such a distribution of argon pressures in the rocks occurred at some time in the past.

And faster cooling could increase the ages by further large factors. I also read of a case where a rock was K-Ar dated at 50 million years, and still susceptible to absorbing argon from the air. This shows that one might get radiometric ages of at least 50 million years in this way by absorbing Ar40 deep in the earth without much Ar36 or Ar38 present. If the pressure of Ar40 were greater, one could obtain even greater ages. Yet another mechanism that can lead to decreasing K-Ar ages with time is the following, in a flood model: One can assume that at the beginning of the flood, many volcanoes erupted and the waters became enriched in Ar Then any lava under water would appear older because its enclosed Ar40 would have more trouble escaping.

As time passed, this Ar40 would gradually pass into the atmosphere, reducing this effect and making rocks appear younger. In addition, this would cause a gradient of Ar40 concentrations in the air, with higher concentrations near the ground. This also could make flows on the land appear older than they are, since their Ar40 would also have a harder time escaping. Do different methods agree with each other on the geologic column?

Back to top Let us consider the question of how much different dating methods agree on the geologic column, and how many measurements are anomalous, since these points are often mentioned as evidences of the reliability of radiometric dating.