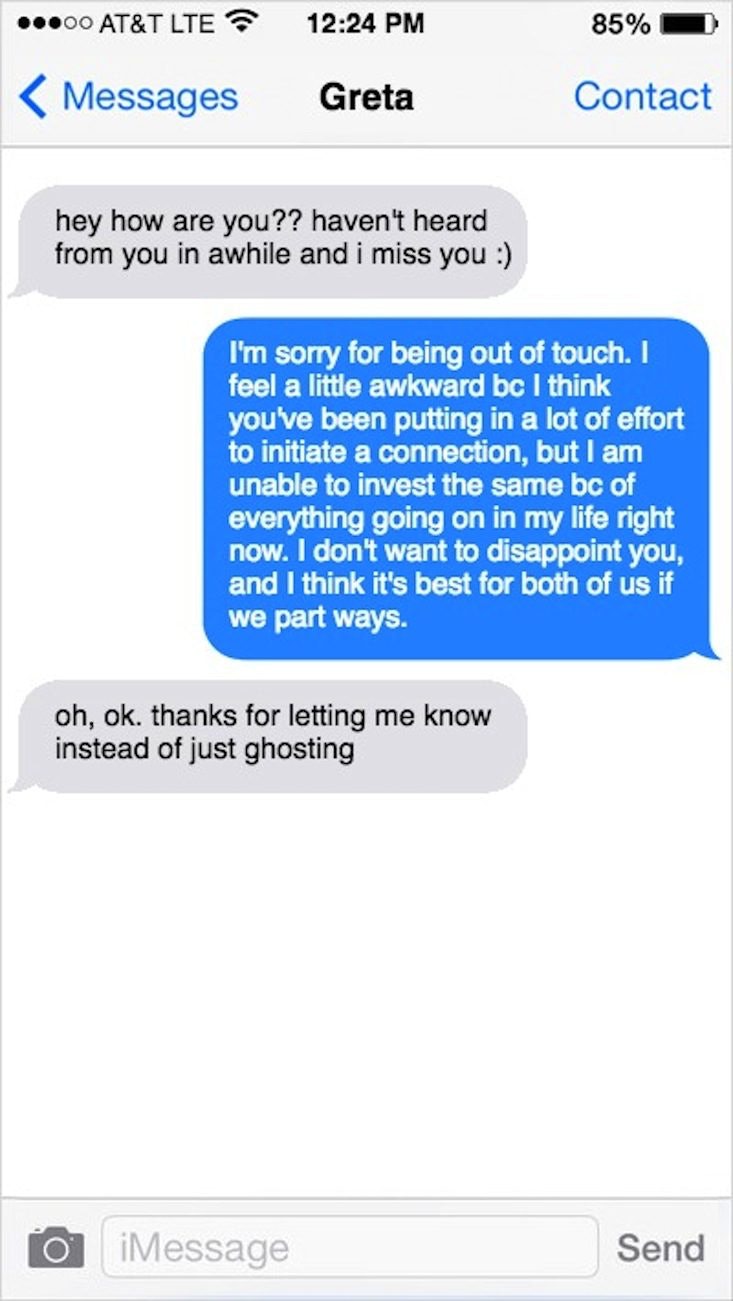 I used to say "I just don't like hurting people. I've since realized that sure, I don't like hurting people, but what's really happening is that I don't like guilt and anxiety and conflict, so I ignore or avoid the "problem" to gain the illusion that "it's" they've gone away And the reality is that they might go away, but they do so wondering what the heck just happened and sometimes send a string of angry text messages.

So before I offer some tips on breaking up with someone, I want to qualify this. I've been on both sides, many times. I've had my heart smashed to bits twice, and I'm pretty sure I've smashed a couple.

I've been on the receiving end of a casual relationship ending over text message, Facebook Chat, the "phase-out," and the "I'm gonna drink few glasses of wine while you tell me you're seeing someone more seriously now and we can no longer talk. And maybe it's because my current relationship has actually lasted longer than two weeks I wouldn't be surprised if our friends had a betting pool going so it won't seem completely insensitive to blog about it, or maybe it's because I feel convicted enough in my research to let the judgment fly, but either way, let's talk about breaking hearts.

Carrie Bradshaw told us that there is a good way to break up with somebody. But I disagree, and I think one of the reasons we have so many "phase-outs" is because heartbreakers believe they should probably have the face-to-face conversation but can't tolerate what they might feel if they do. So ease up on your expectations. Just set your goal to actually communicate to your in-the-dark admirer that you're no longer interested. Thus, the number one tip for breaking up with someone is to actually break up with them.

If you can't do it face to face, do it over text message, email, or Facebook Chat. This is better than a phase out. Let's change the culture from the all-or-nothing face-to-face or disappearing act to make space for the means in-between. Your ex will thank you, and you'll appreciate it when you're on the other end in the future. For example, don't say "I'm not emotionally available" or "You deserve better.


Try something like, "I'm not totally invested in this, and I don't think it's fair to you to continue stringing you along," or "I've been seeing someone else and I think we're a better fit for each other. Don't keep liking their Instagram photos and FB statuses, sending them messages "Thinking of you!

If you feel compelled to do any of the above, ask yourself if you're doing it for them or for you. I have a really hard time knowing people don't like me, but it's unrealistic to expect that an ex is going to just let a breakup slide off their back and switch to being buds with you.

Being rejected hurts, angers, and confuses peeps. The more selfless thing you can do in this situation is be firm with your decision. Remind yourself that feeling anxious, guilty, and conflicted and anything else is OK. It means you care. Don't try to ignore the feelings or tell yourself you shouldn't feel uncomfortable because you're choosing to end it. Be kind to yourself. Anger is a natural reaction to hurt. Remember you're likely not impermeable to insult, so ensure you have supports as well to debrief any negative feedback you receive. At the end of it all, it sucks for both parties.

Hurting someone sucks, and so does getting hurt.

But remember that uncomfortable feelings and difficult experiences are all part of being a human. And, if you feel guilty, it's a good thing — it means you have a conscience.

How to End a Dating Relationship That Is Not Exclusive

Since you're both regulars at the coffee shop, I bet you're going to see her again unless you change your habits. So let her know. Ignoring the emails of someone you see around somewhat frequently is. While I think a lot of people just cease contact and expect people to take the hint, I think it is much nicer to send a brief but kind email like the ones described above.

Mostly because you never know how interested someone might be in you, and wondering what happened is maddening when you really like someone. While I would understand if someone disappeared, I would always think well of someone who took a minute to let me know what was up and didn't leave me hanging. Cutting people off and not responding is really rude.

It's become so commonplace that I stopped getting upset about it when it happened to me, but I always really appreciated guys who told me nicely that it wasn't working for them, and I emailed them back to say thanks for letting me know and to wish them well. It's always best to keep the number of people who think you are an asshole as small as possible, even if you think you'll never see them again.

It's a finite world. That woman you ignored and avoided may become your next door neighbour, best friend's wife, mortgage officer, or boss some day. As you can tell from the spectrum of responses not responding vs respond kindly , there is no one way to go about doing it. This is because we are all very different people, and we all have different preferences. Personally, I would prefer no contact. It's gentle, it lets me down kindly, and it gets the message across. If a guy that I had fun on a date with were to send me an email saying "Thanks but no thanks," or "It was fun, but I don't think we're a great match," I'll probably overthink and overanalyze every word, every punctuation, and even the time and date of the email.

But that's just me. On the other hand, other people would prefer these types of emails. So, no right or wrong answer here. So my initial advice is that you should think about what type of girl she seems to be and go with your gut. However, this advice only applies if she hasn't texted you or called you or emailed you Dude, you need to reply to her because she deserves a response after sticking her neck out there and basically telling you that she likes your company.

You don't HAVE to give her an explanation and you can just fade out, but it'd be so much better if you emailed back or even called her and said "hey look, you're a cool girl and I had a good time when we hung out, but we didn't seem to click so I just wanted to say this instead of fading out and leaving you wondering. If you fade out she'll have a week or two of "oh well maybe he's been busy, or lost his cell phone, let me call him again" and this waiting and wondering SUCKS.

Another voice exhorting you to let her know gently but directly, as mentioned several times above.

KateHasQuestions is totally right: Further dates are a waste of your time, right? Naturally you want to avoid that. Keeping her wondering and waiting until she "figures it out" on her own is you wasting her time. Don't initiate a rejection. Just respond the next time she contacts you, using one of the many suggested kind forms above.

Count me in the camp of people who would prefer "radio silence" from someone if it's 3 or fewer dates.