Dating a guy for two weeks 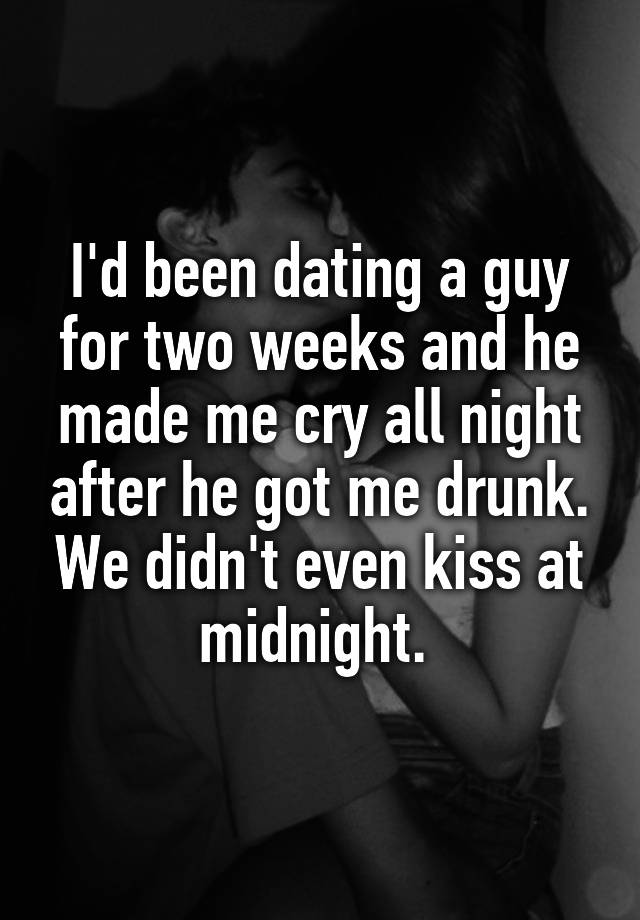 From what i have read of your other post. You like to play games with me. Thus guy seems like he is straight up guy and you still need to play your games. He also has his pace. You don't have to sleep with him. Your also pushing emotionally. Why not be up front with the guy. Just tell him your not ready yet to be exclusive. Also why wouldn't you tell him you have a family obligation this weekend? I guess I know I have been very affectionate and fun and happy when I do see him, I just actually don't want to blow it.

I'll give him a little more encouragement but if a guy I was only seeing 2 weeks said "I'll be out of town this weekend" he is not offering up details so I'm not going to be nosy and press him as to where he'll be going and what he'll be doing. Total, you can't develop an emotional bond with any guy if you insist on playing that game you play where you pretend to be completley unavailable, in hopes that he chases yet harder. I didn't see ay red flags in his behaivior, but a couple in yours: Why didn't you tell him you were gonig to see your gradma? That's not taking things "naturally": And, LOTS of people only date one person at a time.

I don't meet that many guys that pique my interests, so if I didn't have a boyfriend I can't imagine how I would find enough guys I liked enough and equally to date them simultaneously.

It's fine if you do, and 2 weeks might be too soon for someone to expect for you to be exclusive I don't get why you insist that neither of you share anything personal with one another. Sharing is how you form bonds and determine if you like the other person Oh wait, I'm wrong. Dating isn't about that Thus the rules aka games. Which btw I don't think are going to produce any happy long-term results for you. I actually think the guy is getting a bad wrap. I wont comment on the recent calls and emails, but as for the discussion you had at his house I could absolutely see myself in his shoes.

I don't do the whole date more than one people at a time thing. By 2 weeks, I know if I want to date that person or not.

As such, I want to know if she's seeing others so I can make an informed decision. I think by doing what you're doing, you are preventing him from making informed decisions. And this information he wants that you are not giving, believe it or not, does affect him. He is dating you. He wants to know if you're "free".

What's An Appropriate Gift For Someone You Just Started Dating? - Episode 2 The Men's Manual

Nothing personal, but in this situation I see you as the "game player" that I avoid at all costs. You purposely skated around questions and gave him the idea that you were seeing other people whether you admit it or not, you did , and that's playing games. If my girlfriend had acted that way after 2 weeks, I might have pulled back on her.

I appreciate the responses with the being coy and 'game playing' So I am really cautious now, because I let my heart open too quickly in my last serious relationship and got burned. I didn't want to tell him the details of my last relationship and why I was so cautious, maybe someday when we get into the 'exes' discussion So I don't want things to get so intense so quickly and have it blowing up in my face a year later. I gave him a call tonight yes this is against my rules and he was really happy to hear from me, I actually said "I'm sorry if it seemed like I was standoffish last night, I didn't mean to be that way.

Top Dating Tips for Women By a Man | The Soulmates Blog

I'm glad you called, I had fun last night actually. So he said "Wow I already miss you. I want you to feel like you can talk to me. I broke the rules with him tonight, thanks to you, and I am taking a big chance here with this guy. I hope it doesn't turn out like the last one. I have changed my mind due to further information you gave in your last post. I think he sounds like a decent guy who is really into you. I understand how it can be at the beginning of a new relationship where you are nervous about giving too much of yourself too soon in case this person "hurts you like the last one did".

Its OK to be cautious, but I think being honest is good too. Apologising was a nice thing to do- and its turned out good results! But I really treasure these relationships and the memories I have with these people. Girl, I have done this so many times. It's easy to go from "this person isn't right for me" to "hm, wonder what whats-his-face is doing on this boring rainy evening? The one exception is distance - in that case I'd give it a go. Not me, but my brother went on four dates with a woman in college then they went their separate ways.

He Says/She Says: So You’ve Been on a Couple of Dates…Now What?

They met again at their 10 year reunion. They have been married for at least 25 years now. We went out on three dates. Friends set us up. I was into him, he was into me - but on our third date I got stupid drunk and somehow got it into my head that he didn't know what my name was. So I was angry, and he kept calling me by the wrong name to aggravate my drunk butt.

Shockingly, we stopped seeing one another after that. I dated one or two guys in between when I saw him again at my friend's birthday celebration. He called me the wrong name for the rest of the night, we laughed about it and he asked me out again. We've been married for 5 years and have an adorable baby. We dated for six months, at which point he realised the Ivy-league PhD program he just started was not going to be conducive to a relationship or really, his mental health.


A couple years later I'd gotten an email from an old friend out of the blue, and was headed to a conference near him, and so I sent him a friendly email just to say hi and see how he was doing. We spent a day together and nothing had changed. We made arrangements to spend a weekend together and everything was going great until we broke a condom and I took the morning after pill. I do not handle HBC well at all We were actually planning for him to come with me to my grandmother's the next weekend and he'd told his mom we were dating again.

Later on we emailed a few times and apologised and had relatively good closure. Had it not been for that though Maybe if we were meant to be we'd have pushed through that mess? I think he's married now; hopefully as happily as I am! Not a "meh" and then "I'm bored" on either of our parts. We went on a couple of dates. He was steady and nice but didn't spark a lot of interest. I met an edgy dark bad-boy sort of fellow and fell head over heels for him.

That lasted 3 bad months. First guy and I were still running in the same circles and he never lost interest. A couple of months later, we were at a church event and I was talking with his mother. He asked us both out to dinner.


We dated on and off for a couple of months. Then it was just on and we've been married for 34 years now. I figure it took a bad guy to teach me what a good one looked like.

My boyfriend likes to say it took him a year to get a second date. We met online and went out once. We made headway into getting to know about each other. I liked what I saw but it felt effortful, and the next day I decided impulsively that he wasn't for me romantically and sent him a polite rejection with an invitation to be friends instead. He sent back a note that respectfully declined my offer. There was something in the tone of his response, a wistfulness and sense of regret for a lost chance, that brought me up short.

I replayed the date in my mind and knew without really understanding why that I had made a dumb mistake, but that it was too late now to do anything about it. In the year following, I got into a relationship with a decent but obviously incompatible dude which predictably fell apart, spent some time single, and finally felt ready to date again, like a grownup this time.

I came across his profile again and saw he was single.