Secondly, unlike Splinter Cell Conviction, you cannot re-play missions you've already completed just for fun, meaning once you finish a mission, or the game, you're done.

No replaying at all. You need to start the game all over again. To a lesser extent, you cannot fully complete the game unless you play co-op online and play missions with Briggs and Sam working together. Online co-op gameplay is fine, but shouldn't be required in single player mode. Considering that Splinter Cell Blacklist continues the story where Splinter Cell Conviction finished, in my opinion, it is a must-play for all fans of the Spinter Cell series.

The interrogation is brutal and entertaining and a new bonus for new comers and older fans alike. In spite of Conviction being dreck, this follows it, even leaving in the daughter, although we get good drama from the calls to her. A group known as The Engineers threatens terrorist attacks on US soil if they do not pull out of overseas bases. Thus, the charismatic villain does what he should, and bring up a debate. This is the first of these to not have Michael Ironside, and it is a great loss. 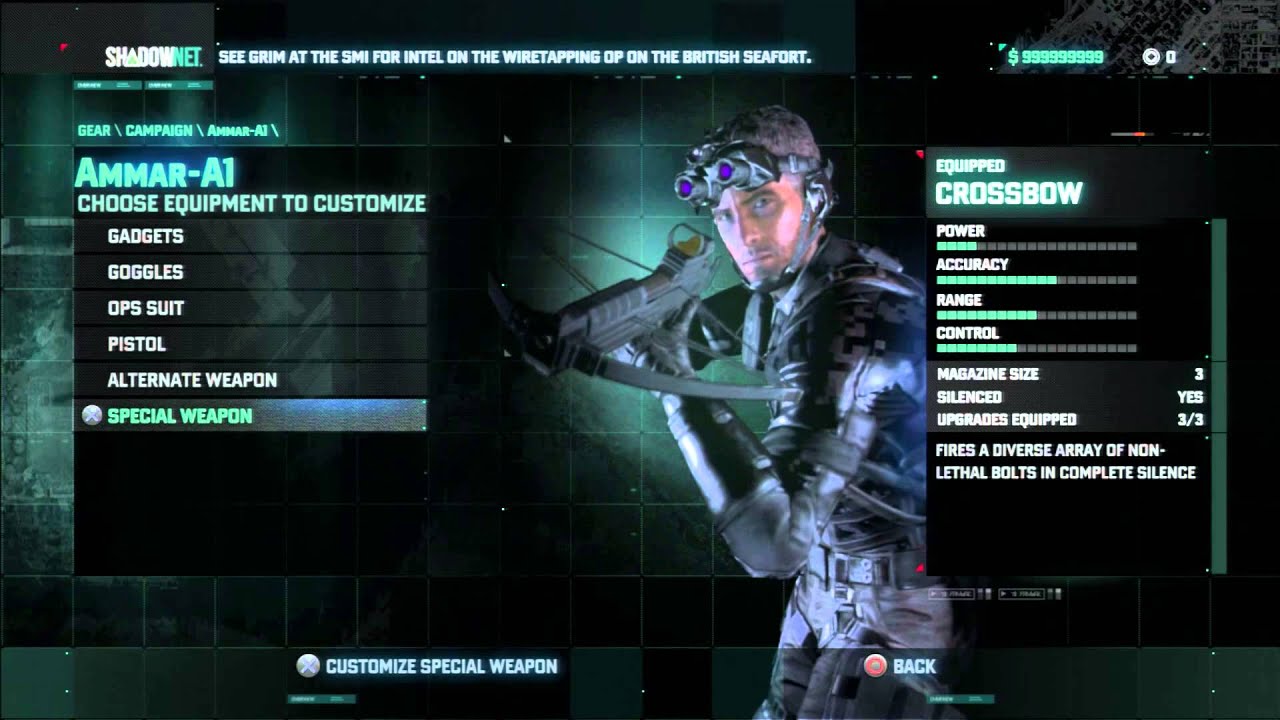 While it's not his fault, that is still what we ended up with. No, he does well, albeit sounding too young. We have some cool dialog, with humor, banter, and clear relationships. The characters are archetypes, such as the nerd, who is sometimes annoying as the comic relief.

Several return from earlier. Everyone is super-serious all the time, Grim isn't just the name of one of the characters, it's the mood of every one of them. The controls are somewhat stiff and not intuitive or fluid. Problems a few, yes, still, there shouldn't be any at all arise because one key can do more than one thing, in the same situation. No, this isn't on par with the first four. Nevertheless, it is pretty good. The levels are organic and cool reuse of some areas within one mission, and using someone who worked with the bad guys, gets monotonous , based on actual locations around the Middle East and the West, such as a water plant, a mansion, and, of course, in and on the outside of, a train if it ain't broke.

They allow linear progression through some areas, then opening up to ones that have multiple paths, and you choose whether, and how much to, blowing enemies up and away, or sneaking. You have a number of tools focused on the latter, and the former is enabled via the third-person-shooter elements of this. Go direct or use acrobatics: From up there, you can use one-handed equipment, unless a nearby foe is countering it!

Of course, not your two-handed. These can be restocked at the relatively frequent boxes, or replaced with those of the fallen. This retains the mechanics of hiding in the dark and in silence, as premiered in Thief. You note patrol paths and guard posts, keeping in mind that they can change when you return to the most saved checkpoint yes, those get frustrating and often intersect, and plan how you approach it.

The sidemissions are samey, and made to be, and thus really feel, skippable. They're there to grind.

The coop elements can be awkward. They do also give fun experiences. The graphics look great without requiring too much, and you can almost always turn the camera degrees. The multiplayer is addictive. There are 5 modes and 6 settings including a decimated hospital, a Uranium mine and a silo. You have to hide in the area while it's underway, with you and fellow players teamwork is key!

There aren't that many playing today. There aren't that many, certainly not enough to keep you around, things to buy and upgrade, unlike something like Assassin's Creed III, perhaps part of why it's less active today. Customizing up to three in addition to the original 3, so you always have choices for both sides and for SP does enable you to make very different setups, with stats stealth, speed, armor, etc. The Spies are fast, agile, climbing walls, hiding and striking from there.

Their 10 firearms are largely SMGs. They have defensive, hiding or "tricking" items to use EMP, smoke grenades, cloaking. They run around each with an assault rifle, a shotgun or even a light machinegun! Pitting the two against each other challenges and gives some strength to both.

Sections and situations favor one over the other, such as camping, with only minor issues following. And they're not limited to using their own team's type in the dynamic and frantic Team Deathmatch, where diverse abilities are constantly in play, and it can be over in mere minutes. There is a lot of disturbing content and some bloody violence in this. I recommend this to any fan of the series and of the genre. BudgetSecurityGames 16 September Keep me logged in on this device Forgot your username or password?

Don't have an account? Sign up for free! Topic Archived Page 1 of 2 Last. Sign Up for free or Log In if you already have an account to be able to post messages, change how messages are displayed, and view media in posts. Boards Tom Clancy's Splinter Cell: Blacklist So SvM is pretty much done right? I'll probably trade this in for BF4. This game will be dead like all the other Ubisoft games.

The problems you listed are a big deal, but to me the biggest killer of this game is the stupid melee system, which is incredibly frustrating and inconsistent heard plenty of people complaining today. This game feels so dumbed down and shallow. I'm pretty much sick of the repetitive game play. I've been playing mostly blacklist mode, and will give classic a go before i make my final decision, but there are just too many things off with the core game play.

Just don't find it enjoyable anymore. Begin the problem that cost me my 40 hours worth of game progress. My C drive is a SSD. I then have a D drive which is a regular HDD.

I install all games and such to the D drive. Let me make it clear. Instead of using D: We make these mistakes. I launch uplay, log back in, and prepare to be happy not thrilled, only the lovely voice of Michael Ironside could thrill me while playing Splinter Cell. Which is not the case with Blacklist.